1. Choose from the paragraphs A–G the one which fits each gap in the text. There is one extra paragraph which you do not need to use.

Your guide to virtual worlds

A However, while other worlds were withering, Linden Labs
was developing their new virtual world, Second Life, which
still exists today. Here you can create your own objects and
buildings, and you have ownership rights over them. ‘Linden
dollars’ are a currency which you can trade with real dollars.
Real-world businesses can sell just about anything you
could possibly want in the virtual world. Universities offer
courses through Second Life, and bands play live shows and
chat with fans in special in-world venues.

B That presents a problem for the many marketers such as
Coca-Cola and Adidas who set up virtual spaces in Second
Life, only to have them largely vacant. These businesses
spent money – in the tens of thousands of dollars – to build
a virtual island as an experiment, but then got little payoff.
Residents are dispersed throughout the virtual world,
making it hard for companies to get their attention en
masse, and there’s a limit to the number of people who can
congregate in one place without crashing Linden’s servers.

C Later, with the rise of the web, virtual worlds started
booming. The Active Worlds platform allowed people to join
for free or pay a monthly fee for premium features, while
The Palace was a more chat-oriented world that became
popular in entertainment circles.

D Second Life is built from user-generated content: its
software provides the tools to design a dress, construct a
building or carry out a range of other real-world activities.
Its population includes a pet manufacturer, a nightclub
owner, a car maker, a fashion designer, an architect, a tour
guide and a property speculator.

E The media buzz led many more people to explore virtual
worlds for the first time and Linden claims to have registered
nearly 10 million avatars for Second Life since its inception.
But many users ended up disappointed.

F The next stage was when Lucas Film Games, a video game
publisher, developed Habitat, a more two-dimensional
environment that included humanoid avatars, and people
could access the game through an early online service called
Quantum Link. Developers Morningstar and Farmer, who still
maintain a blog about their experience, say they generally
allow Habitat residents to set their own rules governing the
world – as long as they couldn’t hack into the system.

G These worlds differ from massive multi-player online games
(MMOGs) because they don’t offer battles against monsters
or have an overriding mission for players. For example, a
resident of the virtual world Second Life might spend time in
that space accumulating virtual land, rather than striving to
complete quests as they would in many popular MMOGs. 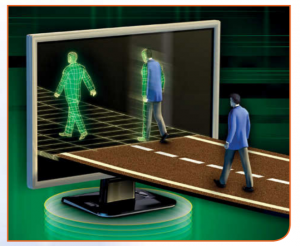 2. What do you think the phrases in italics from the article mean? What clues did you use to guess the meanings?
These worlds differ from multi-player online games.
… eventually a forerunner of the Internet.
… as long as they couldn’t hack into the system.
The Palace was a more chat-oriented world.
The media buzz led many more people to explore virtual worlds.
These business spent money … but then got little payoff.
… making it difficult for companies to get their attention en masse

3. Study the following examples. What do they indicate? Explain each set of situations.